Products
Scalarr Protection Suite™
The most accurate and iOS 14.5-friendly
mobile install ad fraud detection suite
GameAI™
Cutting-edge, AI-driven testing tool
for game development
Technology
Scalarr Neural Networks
The power of neural networks against
fraudsters and how we use it
Unsupervised ML
Automated, personalized machine learning
models that detect any fraud patterns
Semi-Supervised ML
Large-scale machine learning without
sacrificing anti-fraud accuracy
Key Knowledge Database
Maximum accuracy and deeper
understanding of the fraud crime rings
Blog
All topics
Latest articles, news, and insights from the
world of advertising security
iOS 14.5 Insights
Fresh updates, tips, and guidelines about
iOS 14.5 and SKAdNetwork
Articles
Everything you need to know about ad fraud
and how to fight it
Customer stories
Read how companies like yours use Scalarr’s
solutions and save budget
News
Latest news about our products,
functionality updates and newest releases
Interviews
Narrative straight from our clients on how
they got their campaigns free from fraud
Reports
Dive deep into the world of ad fraud with
our reports based on real data
GameAI
Everything you need to know about
AI-powered game development
Company
About Us
Learn more about Scalarr, our team, and
how we got where we are now
Careers
Want to join our team? We’re always looking
for talented people, so drop us a line!
Request Trial
Blog / Articles

Should You Ban Auto-Clicks Ads? 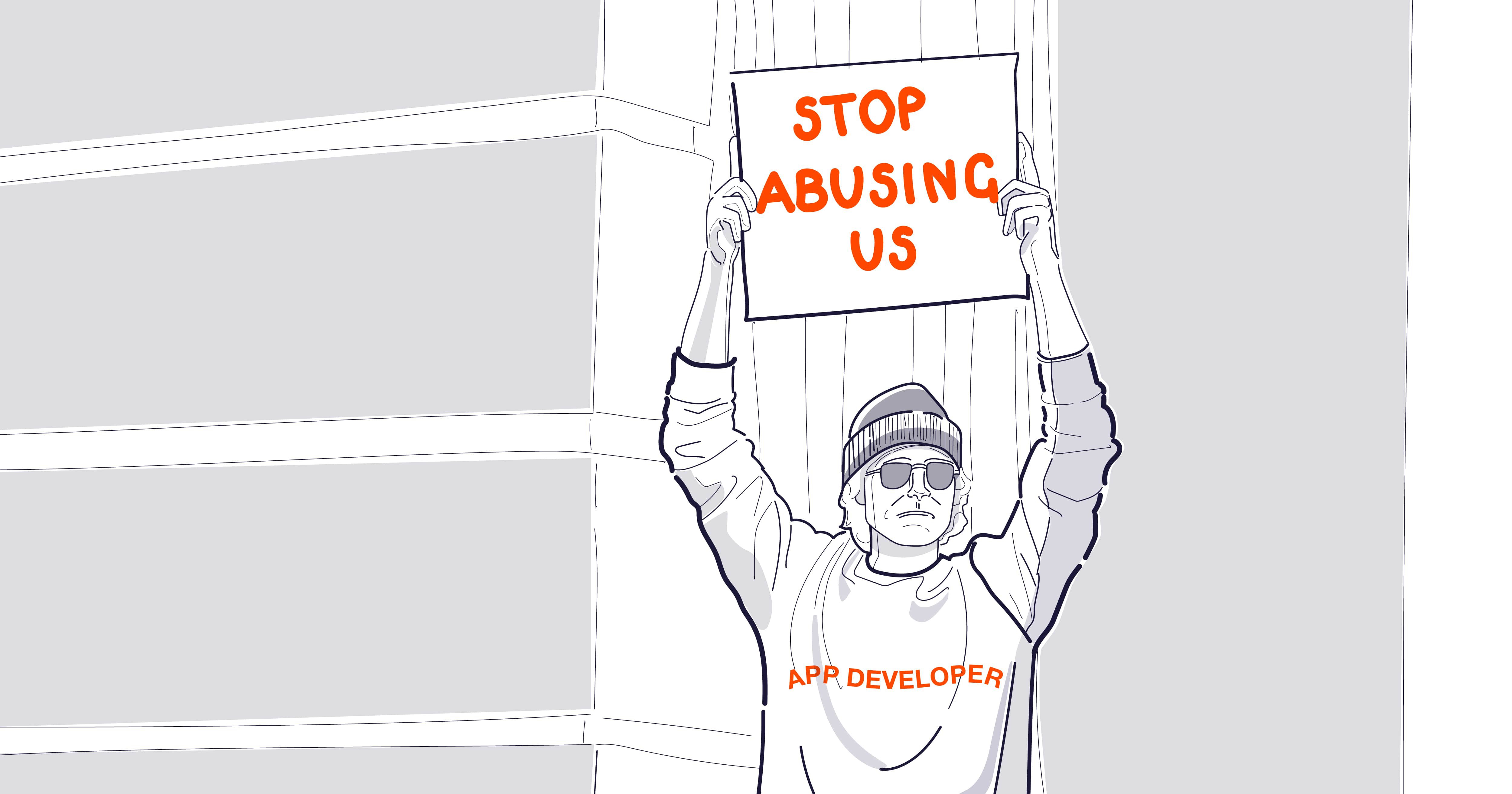 ‘Auto-clicks’ ads (playable ads and “StoreKit” ads), are very popular; nonetheless, they have a lot of vulnerabilities which leads to the highest probability of catching fraud.

At Scalarr, we take a comprehensive approach to detecting fraud, which means combining proactive research activities and reactive measures. Thus, today we focus on one of the most disturbing signals we’ve observed in the last couple of months in some of our client’s ad campaigns and warn the mobile community.

In this post, we’ll explore the role of a specific kind of ad creatives - ‘auto-clicks’ (playable ads and “StoreKit” ads), which are currently very popular; nonetheless, they have a lot of vulnerabilities which leads to the highest probability of catching fraud. And it’s definitely something to take notice of as nearly 80% of conditionally trusted ad networks and DSPs use these types of formats.

The mechanics behind “auto-clicks” ads are: a potential user watches a video ad and upon its completion, he/she is automatically redirected to the app page in the store if the user doesn’t show any interest in this game/app. While redirecting the user, the platform fires auto clicks in order to attribute the user if he/she decides, by coincidence, to install the app.

The decision to install an app is directly and solely made by the user. In the case of playable ads, an ad is placed in between the video and forces a redirect to the store page of the app. Essentially, the user interacts with it and is immediately re-addressed to the app page in the store.

‘Auto-clicks’ ad formats are used to redirect the user through a click link to the application store without their consent. 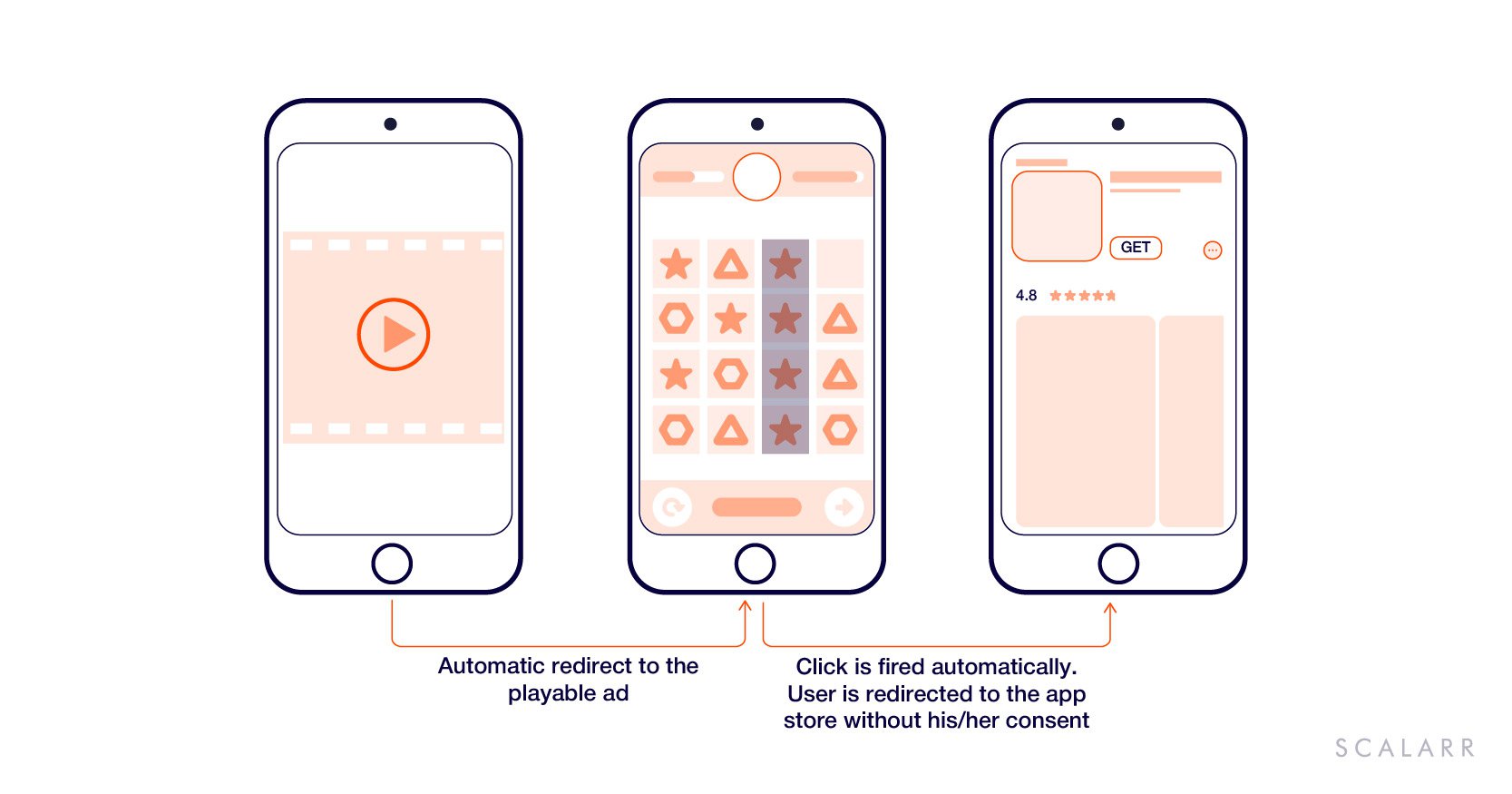 What can go wrong in this scheme and what is hidden behind the reasons of advertising networks to use this ad format to attract users for a client?

1. Extension of the Attribution Window

Traffic providers apply to a 7-days attribution window for a click when it comes to using ‘auto-clicks’ ad formats. In stark contrast, the industry standard is 1-day from the moment the ad is shown.

Evidently, traffic providers ensure more beneficial conditions with this modus operandi, as they get 7 days of attribution instead of the 1-day standard. This leaves the door wide open for a lot of manipulation.

2. Attribution of Organic Users or Users Attracted by Other Ad Networks

Unfortunately, our research shows that at least 35% of all users generated through ‘auto-clicks’ ads should not be attributed to such media sources.

In fact, more than 30% of them have a TTI of more than 24 h. Therefore, a forced redirect through a click link allows ad networks and DSPs to assign organic users to them. And at least 5% of conversions are being re-attributed by applying to such an approach from other sources. Thus, the true CPI cost is severely distorted, and the whole ad campaign could be less than benefited.

Unfortunately, our research shows that at least 35% of all users generated through auto-clicks ad formats should not be attributed to such media sources, as these installations have a TTI of more than 24 hours. This leads to stealing organics and borrowing users from other ad networks and DSPs.

Here’s an example for context: Click attribution has become a key priority, trumping over display attribution. For this scenario, Source A uses auto-clicks ad formats and shows an ad to a user about an app. The user is redirected through a click link to the app’s page. Still, the user does not install the app. After some time, the user notices ads for the same app but in Source B. The user, who hasn’t yet clicked on the ad from Source B, opens the store and installs the app. As a result, the user will be attributed to source A despite the fact that the ad from source B was the latest one before the app was actually installed.

As a matter of fact, using forced redirects and making clicks give sources a guarantee of user attribution. When sources simply show an ad, they don’t have any form of guarantee or protection.

What is LAT? It is a device that has a hidden device identifier, known as IDFA/GAID. Our research shows a very high percentage of LAT devices in clicks behind the clicks from sources that use auto-clicks ad formats, such as the StoreKit format. Actually, it is higher than 60% on average, but in some cases there were more than 90% of these “empty-identifier” devices.

In 60% of all cases where auto-clicks ad formats are used, there are devices with empty identifiers (LAT devices). Some ad campaigns showed more than 90% of these devices behind clicks.

In this regard, there is no way to be certain about the percentage of users that were intercepted from other sources via auto-clicks ad formats, but the number is clearly more than the mere 5%.

It’s relatively safe to assume the percentage of LAT devices is made on purpose to hide the real type of advertising and to not have the option to determine the real percentage of users that can be acquired via auto-clicks ad formats.

Most users don’t enjoy being forcefully redirected to the app store. This can be seen in the dramatically low CR values in sources with auto-clicks ad formats, which is a clear indication of users being unhappy with the situation. In fact, some sub-publishers have CRs that only hit 0.08% or lower.

Using auto-clicks ad formats creates a negative background on your app since users are being forced to install it.

Having a long TTI distribution can be a clear sign of a click spam pattern. The user does not 100% decide whether to click on the advertisement or not. Instead, the click is performed by ad networks and the TTI is prolonged significantly.

Life is full of risks and to survive, it’s important to remain realistic and take each detail into account. Surely, our colleagues who are dedicated to investigating fraud will agree that the ad campaigns covered in this post need to be carefully reviewed by advertisers since:

Simply put, auto-clicks ad formats need to be taken more seriously when investigating for attribution fraud. Pointedly, some of our clients have expressed their concerns whenever these types of ad formats are involved and it's in everyone's best interests to keep a close look and not compromise the safety of the app.