Products
Scalarr Protection Suite™
The most accurate and iOS 14.5-friendly
mobile install ad fraud detection suite
AI EdgeLabs
AI powered cyber-security and anti-fraud solution for edge computing environments
Technology
Scalarr Neural Networks
The power of neural networks against
fraudsters and how we use it
Unsupervised ML
Automated, personalized machine learning
models that detect any fraud patterns
Semi-Supervised ML
Large-scale machine learning without
sacrificing anti-fraud accuracy
Key Knowledge Database
Maximum accuracy and deeper
understanding of the fraud crime rings
Blog
All topics
Latest articles, news, and insights from the
world of advertising security
iOS 14.5 Insights
Fresh updates, tips, and guidelines about
iOS 14.5 and SKAdNetwork
Articles
Everything you need to know about ad fraud
and how to fight it
Customer stories
Read how companies like yours use Scalarr’s
solutions and save budget
News
Latest news about our products,
functionality updates and newest releases
Interviews
Narrative straight from our clients on how
they got their campaigns free from fraud
Reports
Dive deep into the world of ad fraud with
our reports based on real data
GameAI
Everything you need to know about
AI-powered game development
Company
About Us
Learn more about Scalarr, our team, and
how we got where we are now
Careers
Want to join our team? We’re always looking
for talented people, so drop us a line!
Request Trial
Blog / iOS 14.5 Insights & Post-IDFA Future 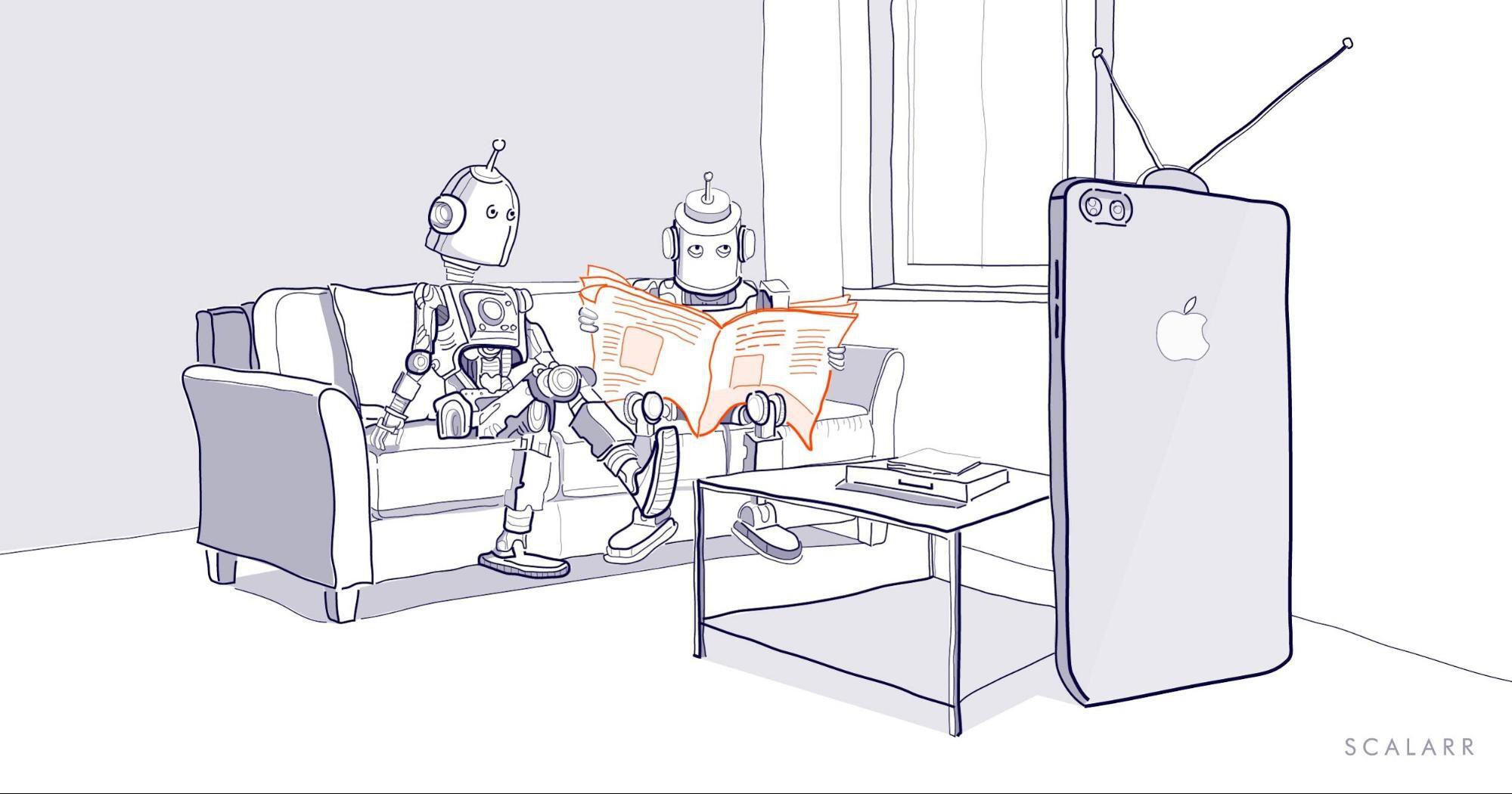 2020 is a year for the books. Crazy, harrowing, and unprecedented, to say the least.

Thus, advertisers are adjusting, adapting, and reimagining the way they approach ad campaigns. With enough to deal with already, Apple threw a curveball to advertisers in June of this year when more strict privacy rules were announced, with some even calling these rules more impactful than CCPA or GDPR.

Just last month, Apple announced that the release of the IDFA privacy rule was going to be slightly postponed, giving developers more time to “prepare for this feature rolling out to users by the end of the year.” Yet, it’s still there and it’s not going anywhere.

In paper, the opt-in nature of the IDFA sounds good for the end-user, but on the other end of the spectrum, the near-death of Apple’s identifier will create many opportunities for fraudsters to defraud advertisers.

For this post, we decided to go on a different route and take you on a journey from the fraudster’s point of view to show you how they will benefit from the IDFA opt-in nature.

Get your fraud on!

Put your fraudster hat on and think about how you got to this point. How does one actively decide to become a fraudster? 100% of the time, the answer is money.

If money is the driving force, what is the vehicle? How do you get started on defrauding advertisers? You’d be surprised, but most of the time, it all starts with a simple YouTube search.

Check out his video!

You might think that it’s kid’s stuff given the fact that it’s as easy as performing a simple YouTube search where the results show you a plethora of tutorials available online of youngsters streaming from their basements, giving you detailed instructions on how to perform different schemes of mobile ad fraud.

While it’s true that you can get started in a modest way, think of mobile ad fraud as a beast on its own merit. A many-headed monster that eats away advertiser’s budgets on the daily.

Think of your fellow mobile ad fraudsters as corporations and not home-based vloggers giving you tips on how to create your own device farm with as little as 10 devices.

With an industry that is expected to reach $520 billion by 2023, ad fraud is a critical risk for advertisers, as their campaigns are in the line of fire. With numbers like this, it’s easy to see how ad fraud will give you high returns.

In fact, the ad fraud industry is so lucrative that ad fraud corporations make more money than drug dealers. With average fraud paychecks that range from $5 million to $20 million, the World Federation of Advertisers claims that ad fraud is set to become the second biggest organized crime enterprise, right behind drug trade.

The truth of the matter is that fraud attacks are becoming more severe, sophisticated, and downright smart. Case in point, in May of this year, Scalarr discovered an AI-powered click hijacking SDK being sold on the Dark Web to bypass intelligent solutions that make use of machine learning algorithms.

In that sense, fraudsters are fighting fire with fire. While it’s not the first time we see similar types of tools being sold on the Dark Web, it is the first time they use cutting-edge technologies and make them available at an affordable price. Only 2 bitcoins, wink wink.

As a fraudster yourself, your main goal is to make money while staying undetected. Luckily for you, mobile ad fraud continues to thrive because a) advertisers don’t always have the urgency this matter requires, and b) mobile is continuously adapting and evolving, making it harder for traditional anti-fraud solutions to keep up.

How does IDFA benefit your fraud schemes?

Now that you’re a fraudster, you must tap into every opportunity to grow your booming business.

Whether you choose AI as your technological ally or rely on the advertiser’s lukewarm approach to fighting fraud, one thing is true: the new IDFA opt-in nature is here to help you even more.

As end-users decide to opt-in or opt-out from being tracked by advertisers, you will find a number of provocative ways to not only continue but grow the way you perform mobile ad fraud.

Here’s a quick list of why the IDFA disintegration will benefit your fraudulent schemes:

As seen in the image above, the IDFA brings about a new reality. Now, it will be categorically impossible to create data connections between a specific device and installs. In its place, advertisers will only see that some device had one install. Not very helpful, right?

How can you take advantage of these uncertain times with the new nature of IDFA?

Let us give you a few examples of attribution fraud and click spam specifically.

A tale as old as time, click spam has been around for quite some time and is a favorite amongst fraudsters. Such is the case that in 2019, Scalarr found that 35% of all fraud in their clients was the cause of click spam.

Being the experienced fraudster that you are, you know that click spam works by spreading fraudulent malware into the largest possible number of user devices with the goal of sending invisible clicks to all advertising links available in the hope that one of those random clicks results in an organic install. That way, you can capture the attribution and claim credit for it.

In a nutshell, with click spam you make advertisers pay for installs that would otherwise be organic.

Prior to the new IDFA opt-in nature, advertisers would identify if too many different ad clicks were made by a single IDFA and mark it as suspicious. Now, there will be many clicks from different campaigns, creating good CTR, and looking like anything but suspicious.

Another scenario where IDFA can help you is in fingerprinting attribution. With IDFA in place, advertisers would see many different ad clicks from several IP addresses with the same patterns made with several IDFAs, and as such, mark it as an anomaly. After the IDFA is gone for good, advertisers will see large amounts of clicks from a single IP address and it will look legitimate.

For this to work, you will need to use dynamic IP addresses, mobile internet, and locations with limited IP range to avoid detection by fingerprinting and IP.

But believe us, you can take advantage of the death of IDFA with more than just click spam. Let’s take a look at click/install farming for example.

Click/install farming is an old-school scheme that is equipped with large numbers of devices that click, install, or interact with an app to claim credit and receive payment. It can be automated or human-operated.

Now, click/install farms are not so popular in Apple devices, that is true. For one, the devices have a higher price point that fraudsters shy away from. Also, IDFA kept them at bay.

You see, if a device was detected as being part of a device farm, it is blocked and the device ID is no longer trusted. The farmer can’t make money anymore.

When IDFA is gone, farmers will simply restart the farm and start again.

It’s not all rainbows and butterflies for your fraudster way of life. Apple claims that they will help with cases when fake installs take place by checking whether the user has actually installed the app by visiting the App Store.

Most importantly, advertisers are highly data-driven and more than suspicious of even the slightest anomaly in their traffic.

Nowadays, advertisers go the extra mile and investigate strange behavior such as good CTR with poor ROI, establish harder standards for performance KPIs, pay extra attention to CR and CTR anomalies in post-install activity, and use exclusion lists to prevent fraud before it even occurs.

So, you see, it might not be as easy as you think to get away with mobile ad fraud.