Products
Scalarr Protection Suite™
The most accurate and iOS 14.5-friendly
mobile install ad fraud detection suite
Scalarr DeepView™
Advanced AI-driven fraud detection solution
for programmatic ad exchanges and DSPs
AI Edge Labs
AI powered cyber-security and anti-fraud solution for edge computing environments
Technology
Scalarr Neural Networks
The power of neural networks against
fraudsters and how we use it
Unsupervised ML
Automated, personalized machine learning
models that detect any fraud patterns
Semi-Supervised ML
Large-scale machine learning without
sacrificing anti-fraud accuracy
Key Knowledge Database
Maximum accuracy and deeper
understanding of the fraud crime rings
Blog
All topics
Latest articles, news, and insights from the
world of advertising security
iOS 14.5 Insights
Fresh updates, tips, and guidelines about
iOS 14.5 and SKAdNetwork
Articles
Everything you need to know about ad fraud
and how to fight it
Customer stories
Read how companies like yours use Scalarr’s
solutions and save budget
News
Latest news about our products,
functionality updates and newest releases
Interviews
Narrative straight from our clients on how
they got their campaigns free from fraud
Reports
Dive deep into the world of ad fraud with
our reports based on real data
Company
About Us
Learn more about Scalarr, our team, and
how we got where we are now
Careers
Want to join our team? We’re always looking
for talented people, so drop us a line!
Request Trial
Blog / Articles

What is causing a negative impact on your ROAS today? Marketing trends across the world are going haywire as what used to be the norm is no longer standard and thus, new trends emerge with new things to measure and observe. An industry survey conducted in February 2021, showed that over 50% of the respondents used their phones between five to six hours a day, not including work-related smartphone use, while approximately 22% used their phones between 3-4 hours, which is still a significant amount of time.

It’s evident that consumers are spending more time online than ever before and companies need to be pushing new content and ads effectively to interact with their target audience in a meaningful way. Companies are opting to buy more and more traffic . Unfortunately, this can lead to large sums of invalid traffic, meaning that marketing spend is being ineffectively used.

Now, invalid traffic comes in different forms; so far, we’ve unveiled the presence of three important types of invalid traffic that impact both the quality and effectiveness of traffic. These are: 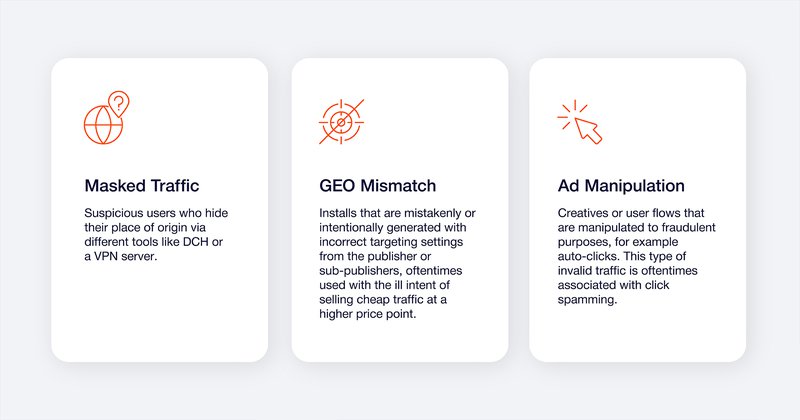 If you inadvertently invest in invalid traffic, it negatively impacts your ROAS, leaving you with the strategically complex task of taking initiatives to remediate this pain point.

In this past year, we saw a significant increase in marketing spend on invalid traffic, from the first to the third quarter where GEO Mismatch reached 3% (5 times increase). While in contrast with other significant levels of fraud in traffic, this type is oftentimes undermined or misunderstood. 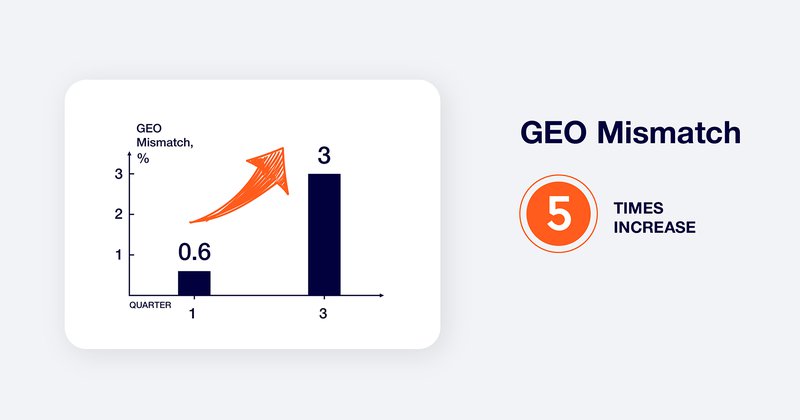 The perceived lack of negative impact hinders companies from truly addressing GEO Mismatch to prevent its harm. In fact, Scalarr forecasts that GEO Mismatch will continue to increase, jeopardizing User Acquisition (UA) budgets along the way and distorting product metrics as well as the feedback loop needed for soft launches.

In the specific case of GEO Mismatch, we know that incorrect targeting settings are the main culprit behind its existence. It also doesn’t help that traffic sources do not clearly define the real GEOlocation, e.g., advertising targeted to Japan that is instead played in Malaysia.

To carry out GEO Mismatch, bad actors use DCH or VPNs to complicate detection, making it harder to verify the real location. This requires a unique level of expertise, experience, and tools that MMPs do not include in their arsenal. To achieve this level of protection against GEO Mismatch, advertisers need expert support of robust AI-powered solutions that specialize in this type of fraud detection.

Based on our data, these are the top 5 countries - Germany, Great Britain, Finland, France, and the USA - affected by GEO Mismatch.

Considering that advertisers can end up paying up to $3-4 dollars more per invalid install due to GEO Mismatch, the numbers can become very scary when adding volume to the mix. For example, one of our recent clients had 400K installs that amounted to over $1 million USD in losses.

As privacy and the use of VPNs grows by the day, we can expect a significant increase in GEO Mismatch cases. Also, it doesn’t help that there are several countries with strict policy regulations that only increase the use of VPNs.

Now is the time to take a hard look at your traffic and identify if you’re paying for invalid traffic due to GEO Mismatch or any of the other invalid traffic types we mentioned earlier. By engaging in cooperation with Scalarr, you not only detect these types of invalid traffic types with ease, receiving expert assistance to refund you money that was not allocated as intended, but it also shields and protects your UA efforts from fraud attacks through advanced use of AI technology.

Products Scalarr Protection Suite™ Scalarr DeepView™
Resources Blog Customer stories News Reports
Company About  Us Careers
© All rights reserved. Scalarr Inc., 2021
Privacy Policy Cookie Policy Your CA Privacy Rights Privacy Shield Policy Services Agreement DeepView Services Agreement
This site uses cookies and other tracking technologies to improve your experience on the site. By using this site, you are agreeing to our use of these technologies. Learn more
Got it